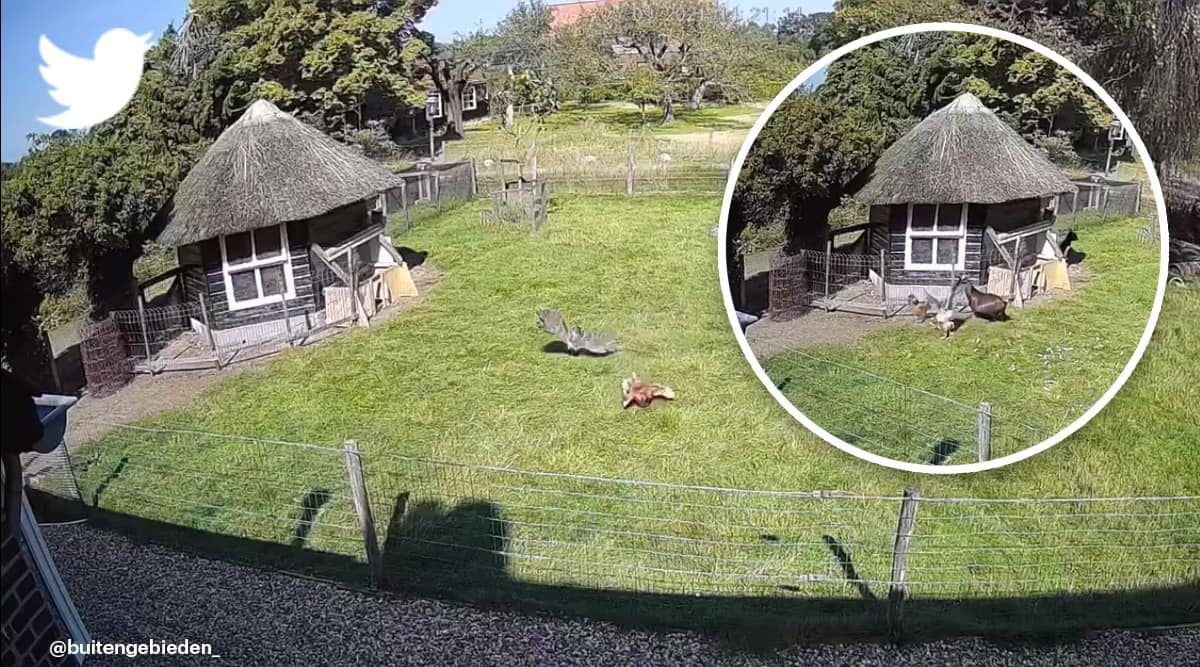 It is always good to have friends that have your back and this is exactly what was portrayed in a viral clip featuring a rooster and a goat, who rescued a chicken being attacked by a hawk.

Jaap Beets, a farmer in Netherlands’ Gelderland was busy working on his farmhouse when he heard a commotion from outside his livestock field. What was happening outside was as dramatic as it could be.

In a CCTV footage which has now gone viral, a chicken is seen roaming around in the farm when a goshawk suddenly attacks it. While the helpless chicken is unable to free itself from the clutches of the hawk, it soon receives help from a rooster as the rest of the animals run around the farm to save themselves,

On seeing the hawk still holding onto the chicken, a brown goat joins the rescue and after struggling for a couple of moments, the two are able to free the bird and save its life.

Beets, who watched the footage on camera, told the Daily Mail that he was “proud of the rooster and goat” and also “relieved that the chicken survived”. Confirming that the chicken was safe, he added, “It took only 17 seconds between the appearance and disappearance of the hawk.”

Since being shared online, the clip video now has garnered 1.6m views, with netizens appreciating the bravery of the goat and the rooster. Some also shared similar experiences on the viral post.

My faith in the sentience of farm animals has been reinforced. Animals feel love, grief, loyalty and fear, much like humans do. Well, some humans………..except for certain cultish robots. 🤷🏽‍♀️

Absolutely incredible how that goat enveloped the chicken and got him inside. There’s more to animals than we know. That’s why they are so special and deserve to be loved and treated well. All of them.

When ppl say ‘animals don’t have thoughts and feelings’, these animals didn’t just move to something screaming and stop a loud noise. They ran to save their friend. They knew if they didn’t, something bad would happen. Listen to animals, bc they’re communicating volumes to you.

I had two ducks. A hawk swooped down to try to grab one. I ran over and the hawk stood me down. The other duck, the male, got in the hawk’s face flapping his wings. The hawk backed off