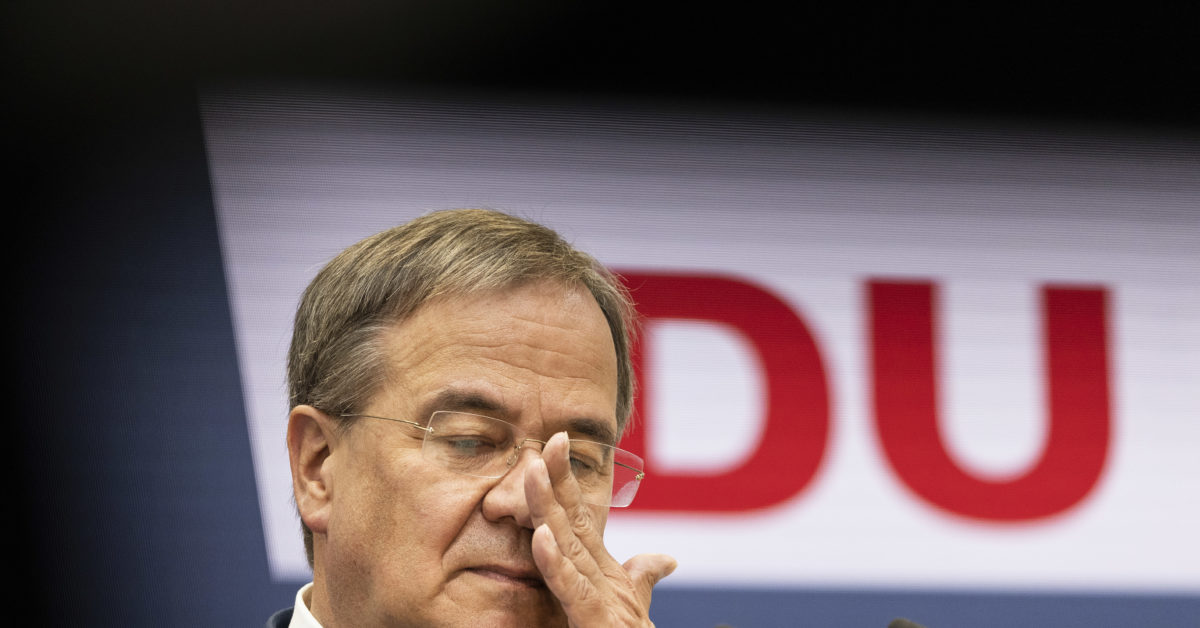 BERLIN — Slowly but surely, Armin Laschet began on Monday to acknowledge the obvious: He lost.

After a brutal morning of recriminations behind closed doors, the leader of Germany’s ruling Christian Democrats, looking tired and disheveled, stood before the cameras at party headquarters and made a listless case to lead the next government.

Even as Laschet, the premier of North Rhine-Westphalia, insisted he would soldier on after the center-right’s historic loss in Sunday’s national election, it became increasingly clear that his heart was no longer in the fight. Laschet’s CDU, which campaigned together with its Bavarian partner, the Christian Social Union, finished second with 24.1 percent of the vote, losing more than a quarter of its support — or around 6.5 million voters — compared to the last election in 2017.

The Social Democrats, currently the junior partner in Germany’s governing coalition, garnered 25.7 percent of the vote, an increase of more than a quarter over 2017 and a clear, if modest, lead over the conservatives.

“I would have preferred to be first,” Laschet said of his party’s worst showing in a national election in the postwar era. “I understand, of course, that I bear some personal responsibility for this result.”

Though he offered congratulations to Sunday’s winners, Laschet refused to accept that the Social Democrats had a mandate to build a coalition, arguing that any result below 30 percent was not sufficient to make such a claim.

But as the day progressed, it became increasingly clear others would be making that decision for him.

The only viable coalition option for either the Christian Democrats or the SPD is to team up with the Greens, who finished in third place with 14.8 percent, and the business-friendly Free Democrats, who placed fourth with 11.5 percent.

Leaders of the two smaller parties said they intended to explore coalition options with one another before approaching one of the larger parties. The Greens also made no secret of which way they were leaning.

“There’s plenty of reason to expect the next government will be a traffic light,” said Greens’ co-leader Robert Habeck, using Germany’s shorthand for a coalition between the SPD, FDP and Greens.

While there’s some precedence in Germany’s postwar history for the No. 2 party to lead the government, the CDU’s historic collapse and Laschet’s low standing in the polls make such an outcome in the current circumstances a longshot.

Laschet’s continued insistence that the center-right was still in the game is likely aimed at making the path towards building a coalition as difficult as possible for the Social Democrats, a tactic that didn’t escape Olaf Scholz, the SPD’s chancellor candidate.

“Parties that have been voted out of office shouldn’t try to build a government,” Scholz said on Monday, adding that “it delegitimizes them.”

Laschet’s “continued insistence that he has a good chance to become chancellor is a bit tiresome,” a correspondent for Phoenix, a German public broadcaster, said with exasperation on Monday after the conservative leader’s press conference, adding that the candidate appeared to lack the “humility” to acknowledge that he had lost.

A commentator for Der Spiegel went even further, suggesting that Laschet had taken refuge in a “bizarre parallel universe” and that he had “lost touch with reality.”

It seemed only a matter of time, however, before Laschet would be forced to confront the facts.

The criticism he faced from within the party executive Monday morning, where leaders from the CDU’s regional branches in eastern Germany blamed Laschet for Sunday’s result, is likely only a prelude for a full-blown battle over the future of the party.

By the close of business on Monday, Laschet, who only took over as head of the CDU this year, faced the first calls for his resignation as leader from the party ranks.

“We need a true new beginning,” said Marcus Mündlein, the head of the CDU’s youth organization in Saxony. “That can only happen if our chairman and chancellor candidate Armin Laschet accepts the consequences for this loss of trust and resigns.”