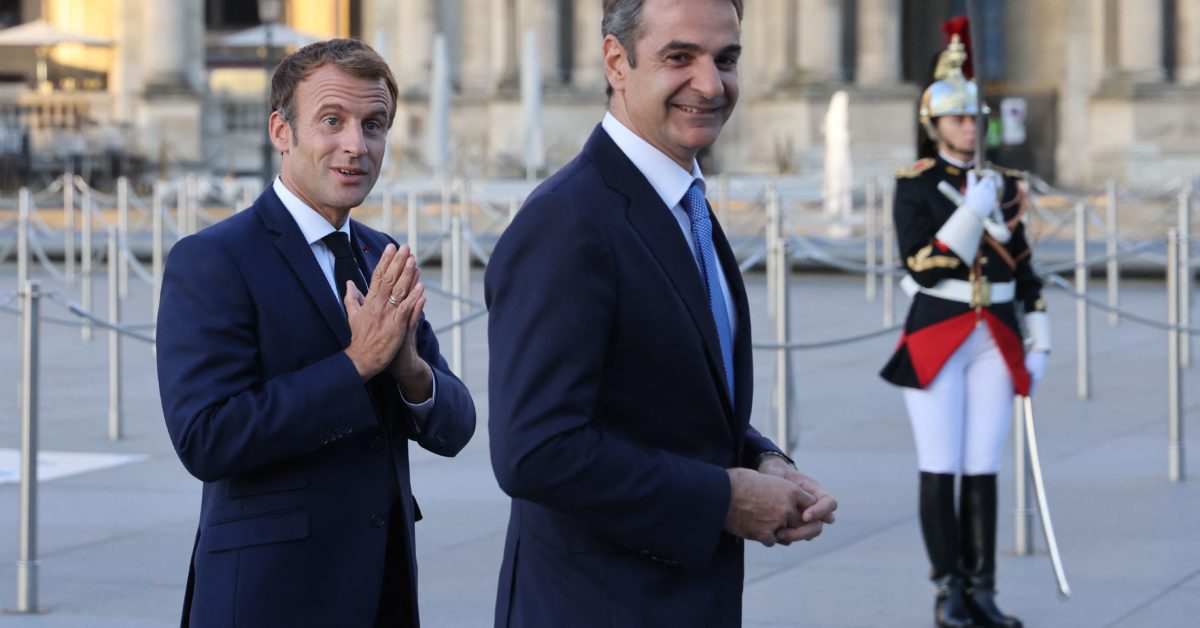 ATHENS — France and Greece will sign a major defense deal on Tuesday — a signal Paris is cementing military ties within Europe after a diplomatic falling out with Australia and the U.S. over a canceled submarine contract.

The new deal will include commitments from Greece to purchase roughly €5 billion worth of French warships and fighter jets, as well as a clause on mutual defense assistance, according to three Greek government officials.

The partnership occurs in the shadow of a diplomat blow for France. Nearly two weeks ago, Australia, the U.S. and the U.K. unveiled a surprise military pact, known as AUKUS, that prompted Canberra to rip up a €50 billion submarine deal with Paris. The announcement enraged France, which urged its European neighbors to focus on shoring up their own defensive capabilities in response.

“There is a connection with what happened with AUKUS,” said Faithon Karaiosifidis, a defense expert and publisher of the Greek magazine Flight. “France is taking everything in Greece and can come forward presenting this agreement on defense cooperation and cohesion as the basis of the European defense integration and the beginning of a European army.”

The Greek navy has been looking for a long time to upgrade its fleet by buying new frigates and modernizing its existing ones. The need became more acute last year, as Greece faced growing tensions with Turkey in the Aegean and the Eastern Mediterranean Seas. The two sides exchanged daily barbs and came closer to a full-blown clash than they had in 25 years.

In recent months, the Greek navy received bids from six countries, including France, the U.S., the Netherlands and the U.K. France’s proposal carried the heftiest price tag. As the navy reviewed the proposals, France submitted an improved offer in recent days, though it was still pricier than the other bids, one official said.

“This is definitely a political decision, not one taken by the Greek navy,” Karaiosifidis said. “The cornerstone of the deal is the defense assistance clause. One could not imagine something similar coming from the other countries.”

The deal will likely include six warships — three frigates and three corvettes set to start arriving in 2025 — with the option of two or three more ships in the future, according to the officials. Greece is also expected to purchase six more Rafale fighter jets.

The mutual defense clause contents were not available on Monday, leaving open the big question of whether or how France will commit to backing Greece if tensions flare up again with Turkey. Some defense experts also raised concerns about whether this deal would include Greek commitments to support French operations abroad, such as its counterterrorism efforts in Mali.

Greek Prime Minister Kyriakos Mitsotakis, traveling back from the U.N. General Assembly in New York, stopped in France on Monday to meet Macron. And on Tuesday, Greek Foreign Minister Nikos Dendias and Defense Minister Nikos Panagiotopoulos will be in Paris, where they are expected to sign the deal, according to government officials.

Greece has yet to formally confirm the deal, with government spokesman Giannis Oikonomou calling for “some patience.”

The agreement is the latest step in a military buildup for Greece, spurred on by its standoff with Turkey.

Last January, Athens placed an order for 18 French Rafale fighter jets, 12 of them second-hand, in a €2.5 billion deal. In September, Mitsotakis announced plans to acquire an additional six planes.

The shopping spree was a notable turnaround for Athens, which repeatedly slashed its defense budget following the 2008 financial crisis. By 2018, the country’s military budget was just €3.75 billion, down from €7.24 billion in 2008.

Still, even before the latest deals, Greece was spending 2.28 percent of its GDP on defense, well above the EU average of 1.2 percent and near the top among NATO members. And between 2019 and 2020, Athens quintupled its military spending. However, the country’s GDP has shrunk by a quarter over the past decade.

Greek officials said the U.S., considered the other prominent bidder for the latest warship and fighter jet contract, will not raise any issues with Tuesday’s deal in the wake of the AUKUS fallout. Washington has also hardly been left empty-handed when it comes to Greek military deals. Athens will soon sign a five-year extension on a defense cooperation agreement with the U.S., eschewing the typical one-year renewal cycle.