10 Things Fans Are Most Excited For In The Matrix Resurrections 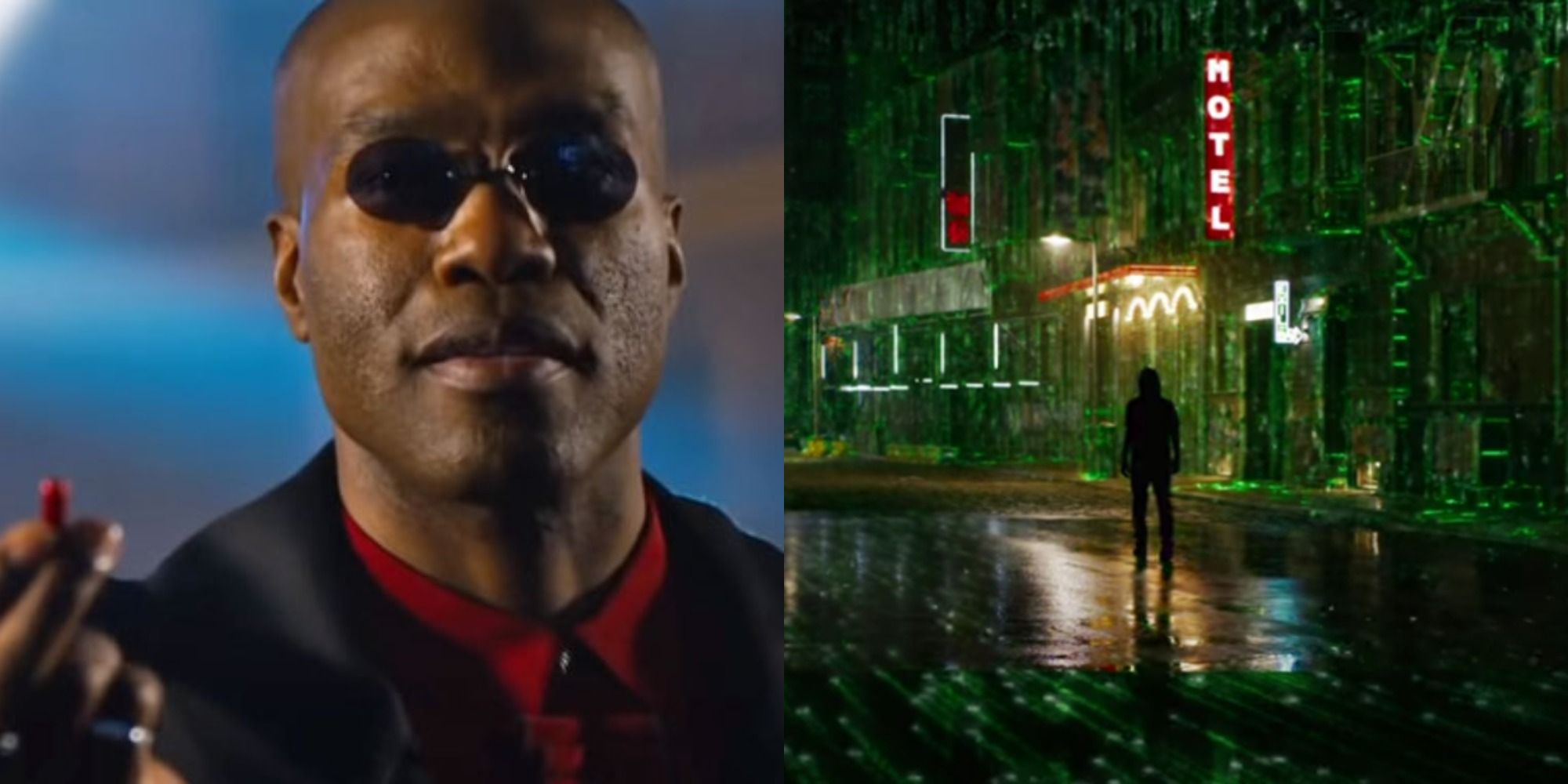 With the release of the trailer for The Matrix Resurrections, fans have once again been sucked into the philosophically surreal sci-fi world of The Matrix, where Neo is once again coming to grips with his understanding of reality, and Keanu Reeves is returning to embody the role that made him a Hollywood icon. It seemed like the trilogy was well and truly concluded in the early ’00s, but the new movie from the mind of Lana Wachowski seeks to apply the mind-bending concepts of the franchise to a new era.

In typical Matrix fashion, the trailer generates more questions than answers, offering a probing look into ideas surrounding reality, transcendence, and fate. Fans are looking forward to a number of things from the new movie, from reuniting with their favorite characters to seeing thrilling action sequences using “bullet time”, but some aspects may not reveal themselves until closer to its release on 12.22.21.

The trailer features The Analyst referring to Neo as “Thomas,” recalling his name in The Matrix (aka “Thomas Anderson”). Since he’s been questioning the events of the other three movies and taking blue pills as part of his “therapy,” it’s possible that “Neo” is simply another personality in his head, and that none of his adventures ever happened.

The Matrix franchise has always explored the concept of what is real and what isn’t by forcing fans to question not only the reality of the characters they perceive on the screen but their own as well. By making them think they too might be in a simulation by rearranging pre-conceived notions of what reality is, the philosophical exercise that has become an expected – and intrinsic – part of the franchise is always deepened (and inspires some pretty epic Matrix fan theories).

There are several action sequences that occur in the trailer that seem inspired by the first movie in the franchise, like the rooftop scene, the subway scene, and the lobby scene, while also expanding on them in dynamic ways. Hopefully, this indicates keeping in the spirit of the other movies while also creating new action scenes that will be just as iconic as the first ones.

When The Matrix came out, it fundamentally changed the action genre with exciting sequences that had never been seen before (with several things from The Matrix still holding up today). Concepts like “bullet time,” the heavy use of wirework, and experimental CGI culminated in a movie that inspired many imitations.

8 References To The Rest Of The Franchise

Seeing the presence of binary numbers, the iconic Matrix coding, familiar faces of fan-favorite characters, and other callbacks to the previous franchise will not only ground the new movie in the framework of the franchise, but it will also provide a tether between the era of those movies and the current one.

While some fans might perceive callbacks and references to the previous movies as middling cash-grabs, there’s the possibility that the movie will be a commentary on reboots and remakes for that very purpose. The Matrix franchise is an iconic part of pop culture, while also highlighting how it often takes meaningful icons and endlessly duplicates them until they are meaningless.

7 Down The Rabbit Hole

RELATED: 7 Other Movies That Influenced The Matrix Franchise

When Morpheus told Thomas Anderson to “wake up” and “follow the white rabbit” in The Matrix, he was directing him towards the path that would lead him to Trinity and the truth about The One. A similar existential quest could be just what the franchise needs to reset after the convoluted events of the two sequel movies.

6 The New Iteration Of The Matrix

At the conclusion of The Matrix Revolutions, the Oracle is asked how long she thinks the new version of the Matrix will last, to which she replies, “As long as it can.” The Oracle is responsible for a lot of quotes that mess with people’s heads, but this relatively straightforward answer implies that the movie takes place in that current iteration of that Matrix that has been running for almost two decades.

Since Neo sacrificed himself as a Messiah to the machines in that movie, fans will be eager to see what sort of Matrix his sacrifice bore. He knew there were many other Neos before him, and that there could potentially be others after him unless he chose to die before he was reassimilated by the machines and used the way he’d been used before (because humans always rejected a perfect Matrix).

Aside from Keanu Reeves returning to the role that made him a Hollywood icon, the trailer confirms the presence of several other beloved characters from the franchise’s history, including Carrie-Anne Moss as Trinity and Yahya Abdul-Mateen II as a young version of Morpheus.

It’s unclear whether or not this movie will serve as a new adventure for old heroes, or a means to pass the torch to a younger generation of avatars. The appearance of a younger Morpheus with an older Neo/Thomas suggests temporal differences, not necessarily a new direction for the franchise. Fans are still holding out hope that Laurence Fishburne, as an age-appropriate Morpheus, and even Hugo Weaving as Agent Smith, will appear either in this movie or a sequel.

The world of The Matrix franchise is unique, enigmatic, and full of endless possibilities because of the parameters of its storyline. Each movie has built on the lore created in the first movie, with more information being revealed about how “The Matrix” was created, the dynamic between the machines and the humans, and the situation going on in the Real World.

The new movie will add to what fans already know about the world of The Matrix, the Real World, and possibly even more of the Machine World. Knowing the franchise, more answers will undoubtedly produce more questions.

One of the most appealing things about the franchise has always been its eye-catching sense of style. From the slick PVC catsuits made famous by Trinity and the mandarin collars and frameless sunglasses worn by Morpheus to the many classic trenchcoats boasted by Neo, the movies have their own instantly recognizable aesthetic.

From the dress code of the trailer, characters appear to be boasting the same singular look that made the Matrix series so popular in the late ’90s and early ’00s. With a current resurgence of that era of fashion, trench coats and shades may be en vogue once again.

By using anti-capitalist and anti-corporatist themes in the original Matrix movies, the franchise developed a strong socio-political message. Those in “suits” (the agents) wanted the system to run efficiently, with everyone knowing “their place.” But with the development of resistance fighters “waking up” in the Real World and entering the Matrix as radical harbingers of change, that system was irrevocably disrupted in a revolution of change.

The franchise has always emphasized a message of unity through diversity, with everyone outside of the agents resembling a vast background of physical and cultural differences. Watching Neo look bewildered at crowds full of people “plugged in” with their phones and devices, it looks like these messages are alive and well.

With Neo/Thomas needing to retrace his steps through his “dreams” and uncover the truth about the meaning of his life, he will undergo a change to his perception of reality, of himself, and of what it means to be alive. This seems to be congruous with the themes seen elsewhere in the movies.

The franchise features humans “waking up” to find their true potential, understanding their role in their destiny, and becoming what their destiny has decreed they will be –  indicating themes of fate versus free will, determinism, actualization, transformation, and transcendence in ways that are physical, mental and often spiritual.

NEXT: 6 Reasons Why The Matrix Sequels Aren’t As Bad As People Say They Are (& 4 Reasons They Are)


Next
MCU: 10 Times Tony Stark Was The Smartest Person In The Room

Kayleena has been raised on Star Wars and Indiana Jones from the crib. A film buff, she has a Western collection of 250+ titles and counting that she’s particularly proud of. When she isn’t writing for ScreenRant, CBR, or The Gamer, she’s working on her fiction novel, lifting weights, going to synthwave concerts, or cosplaying. With degrees in anthropology and archaeology, she plans to continue pretending to be Lara Croft as long as she can.