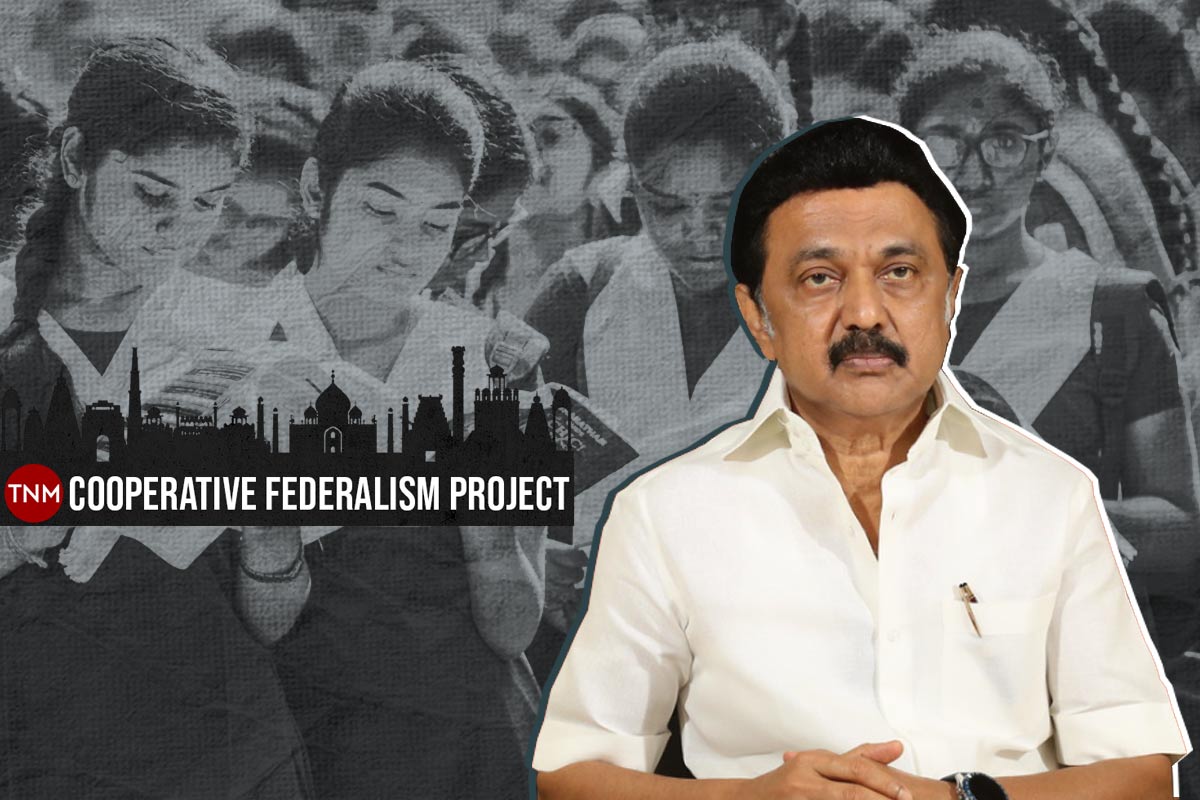 Tamil Nadu has contested a law passed by the Parliament with its new Bill against NEET. Here’s an explainer on the Bill’s legal standing and Tamil Nadu’s future options if this Bill is not cleared.

This piece is a part of TNM’s reader-funded Cooperative Federalism Project. Indian residents can support the project here, and NRIs, please click here.

In a major step against the National Eligibility-cum-Entrance Test (NEET), the Tamil Nadu Assembly on Monday, September 13, passed a Bill seeking exemption from the centralised exam, and making Class 12 exam marks the basis for medical admissions for undergraduate medical and dental courses. All parties, with the exception of the BJP, supported the new Tamil Nadu Admission to Undergraduate Medical Degree Courses Bill, 2021. The statement of objects and reasons if the Bill said that it is being moved as the National Eligibility-cum-Entrance Test is not a fair or equitable method of admission, and that it favours the rich and elite sections in society.

The aim of the Bill is to do away with the requirement of NEET for admission to undergraduate medical and dental degree courses, and instead provide admission on the basis of the marks obtained in the qualifying examination (Class 12 examination) through normalisation. The government has said that the Bill is being brought in “to ensure social justice, uphold equality and equal opportunity, protect all vulnerable student communities from being discriminated.”


What’s new in this Bill?

Tamil Nadu has in the past moved similar Bills and ordinances, which have not received the President’s nod. However, this time, the Bill focuses less on education, and more on the question of ensuring public health to all, as a fundamental right of citizens.

“The Tamil Nadu Bill addresses NEET from a very different direction. While one angle is federalism, the second and the more interesting angle, is coming from the public health perspective. Tamil Nadu is saying that this measure is actually necessary for public health, rather than just professional medical education, therefore bringing into question the validity of NEET itself. This is the first time a state has challenged this and I feel the Tamil Nadu government has new grounds to contest NEET,” says Alok Prasanna Kumar, co-founder and lead of Vidhi Centre For Legal Policy in Karnataka.

The Bill relies on the findings of a panel that was set up by the government to study the impact of NEET in the state. Earlier this year, the Tamil Nadu government under Chief Minister MK Stalin set up the committee headed by retired High Court judge Justice AK Rajan to study the exam’s social and economic impact.

The Bill has cited this committee’s findings in the statement of objects and reasons, stating that the committee has found that “if NEET continues for a few more years, the health care system of Tamil Nadu will be very badly affected,” that “there may not be enough doctors postings at Primary Health Centres or Government Hospitals, and that “the rural and urban poor may not be able to join the medical courses.”

The Bill was introduced in the House based on the panel’s report recommendation that “the state government may undertake immediate steps to eliminate NEET from being used in admission to medical programmes at all levels by following the required legal and or legislative procedures.”


What next for Tamil Nadu?

The Bill requires the assent of the Governor to become a law. Education is a Concurrent List subject in the Constitution. Admissions to medical courses fall under Entry 25 of List III, Schedule VII of the Constitution, and therefore the state government is competent to regulate the same. When it comes to Concurrent List subjects, both state and Union have the right to pass laws on the subject.

Chakshu Roy, Head of Legislative and Civic Engagement at PRS Legislative Research, had earlier told TNM, “States can amend central laws, but whatever amendments are made are only applicable to that state. Further, the amended law requires the approval of the President. During the pandemic, a number of states were amending labour laws, and some of these were central laws. For the amendment to carry through, the President will have to approve.”

According to the Constitution, though the state and Union both have the power to legislate, the law passed by the Parliament prevails and the law made by the state is void. Article 254 of the Constitution addresses this ‘repugnancy’ of laws, and any inconsistency between laws made by Parliament and laws made by the Legislatures of States. In such cases, President’s assent is required for such state laws that are inconsistent with Union laws and if approved, this law will apply only to that particular state, and not be applicable nationwide. Take for example, Tamil Nadu and the Jallikattu Act of 2017.

Also read: States and the Union: The beginning of the relationship

Now, since Tamil Nadu’s new NEET exemption Bill goes directly against the Union’s law, the Tamil Nadu Governor is likely to forward it to the President. Earlier in 2017, when the Tamil Nadu government then led by the AIADMK tried to pass a similar Bill exempting medical admissions from NEET, it did not get President’s assent, as it was directly in conflict with the Union government’s law on NEET.


What happens if Tamil Nadu’s Bill does not get Presidential assent?

“I would say that Tamil Nadu’s next step could be to challenge the Medical Council of India Amendment (under which NEET was introduced) itself, and contest NEET as constitutionally invalid. In this way, they would be taking their battle to their (Union’s) turf, instead of just defending themselves,” Alok Prasanna Kumar says.

“Tamil Nadu’s new Bill gives an opportunity to recast this whole debate on whether NEET should exist or not on the basis of public health. The purpose is not to regulate medical education, but it is to ensure public health. The point of medical education is not to churn out doctors. It is to improve the healthcare system. Sure, the medical council can prescribe standards, but you cannot remove the matter of public health from the equation. This is why this Bill is an opportunity to completely reexamine some of our constitutional judgements on NEET as well,” he adds.


A reading of the Bill

The Tamil Nadu government has said that the report of the committee makes it “apparent that NEET is not a fair or equitable method of admission since it favours the rich and elite section of the society.” Also, the standard of medical education is no way diluted or affected merely by dispensing with the common entrance examination.

This piece is a part of TNM’s reader-funded Cooperative Federalism Project. Indian residents can support the project here, and NRIs, please click here.

“Social groups affected the most were the students of Tamil medium, coming from rural backgrounds, students from government schools, those having parental income of less than Rs 2.5 lakh per annum, and the socially depressed and disadvantaged groups like the Most Backward Classes, the Scheduled Castes and Scheduled Tribes, the Bill says. “Therefore, the Committee concludes that the NEET is against these disadvantaged groups.” NEET, within its purview, also does not seem to ensure merit or standard of students who are eventually offered MBBS seats, the Bill says.

The Bill added that the committee’s findings indicate that the NEET has “only enabled and empowered comparatively low performing (in NEET score and Class XII score) students to get admission to MBBS.”

“Therefore, the question of NEET ensuring quality and merit of students is to be ruled out.” Comparatively, it has been observed that the Class XII marks based admissions during the pre-NEET period ensured entry of quality and meritorious students, the government said.

“It is evident from the panel’s report that NEET is not an equitable method of admission. The experience of the past four years of NEET has shown that the exam has shattered the hopes and dreams of TN students aspiring for admissions to medical and dental courses, particularly, the students from the socially and economically backward classes,” the statement said. The government has said that NEET has caused a huge financial burden to students from the socially and economically backward classes. “It festers inequality, as it favours the rich and more privileged classes of society who are able to afford special coaching apart from pursuing Class XII. It virtually barricades the underprivileged social groups from medical and dental education. This is against the very object of the equality clause enshrined in the Constitution and it also infringes the right to education of children from these underprivileged classes of society.”

Also read: NEET and the illusion of ‘merit’

Students from affluent sections, after completing UG courses, do not serve in rural areas and they often pursue PG courses abroad. “Thus the number of serving doctors in the state is declining. ” After considering the recommendations of the committee, the government said to ensure social justice, it has decided that the admission to UG courses in medicine, dentistry, Indian medicine and homeopathy in Tamil Nadu shall be made only based on the marks obtained in the higher secondary examination, Class XII or Plus Two.