How does €40m wonderkid Camavinga fit into Real Madrid’s midfield? 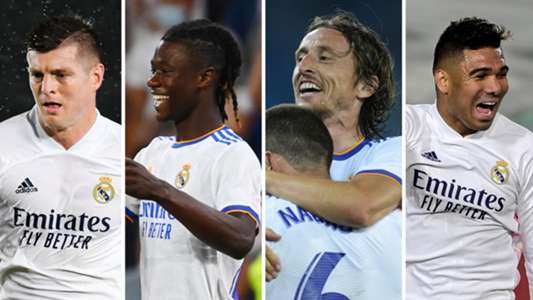 With a triumphant knee slide towards the corner flag, joy written across his face, Eduardo Camavinga could hardly believe it.

The new Real Madrid arrival from Rennes made the perfect start to life at Santiago Bernabeu, the 18-year-old brought off the bench on Sunday to score against Celta Vigo on his debut and secure the victory for Carlo Ancelotti’s side.

It was the fourth in a 5-2 win that ensured Los Blancos sit top of the Liga table on 10 points from four games. It also nodded towards the question on everybody’s lips after his arrival on deadline day for €40 million (£34m/$47m).

Can he become the man to finally end Luka Modric, Toni Kroos and Casemiro’s monopoly on the central midfield positions at Real Madrid?

That trio is a perfect blend that has served Madrid superbly for the past six years, combining power, grace, vision and precision.

Even though Madrid earned a 1-1 draw at home in the first leg, it was a fortunate result. Physically, they could not match Tuchel’s supercharged Blues.

So though Madrid’s midfield trio will still be able to best most opposition, those matches reflected that in the Champions League, at the highest level, it is time the Blancos had further options.

Uruguaya box-to-box midfielder Fede Valverde has a big future at the Bernabeu, but has sometimes been deployed wider on the right to maintain Madrid’s central three.

Ancelotti also is fond of Isco, who shone in the Italian’s first spell at Madrid and has been involved in the first three games, but he is reaching the twilight of his career.

With Madrid visiting Inter on Wednesday in their Champions League opener, the stage is set for Camavinga to show he can compete in the here and now, not just in the future.

One obstacle is that he lacks an obvious role in Madrid’s system, with the established trio all exquisite at their own particular skill-set. Camavinga is an all-rounder.

Although he can start deeper, like Casemiro, he likes charging up the pitch, as shown against Celta when he peeled off to the right in the box and fired home after Modric’s effort was saved.

It took just six minutes for him to strike after being brought off the bench for Eden Hazard, utilising the attacking skills he honed at Rennes last season where at times he was used in a more advanced role.

Only scoring two goals in 71 appearances there, though, it seemed like he might not be able to add too much going forward for Madrid, at least until he struck on Sunday.

Camavinga did not have his best campaign in Ligue 1 last term and was keen to move to Madrid, a club that had chased him for years.

In his 25-minute weekend cameo, Camavinga showed good poise on the ball and weight of pass, looking to help bring the ball forward and build attacks. Even though the sample size is too small to draw any firm conclusions, he looked comfortable and on the same wavelength as his team-mates.

Replacing any of the hallowed Kroos-Modric-Casemiro trio is a huge job, but Camavinga has shown he is capable of perseverance and overcoming adversity in matters far more serious than football.

Born in a refugee camp in Angola before moving to Fougeres, France, his family’s house burned down in 2013, just when he was about to sign for Rennes.

“The day after, I had to go to training and football helped me to relax,” the midfielder told Ouest France. “It was a way of escaping. Everything was burned, everything was destroyed.”

His father told him he was going to be a great football player and would help rebuild their home like that. “I was the family’s hope,” added Camavinga. “Suddenly, I was motivated.”

The last time Madrid triumphed in Europe in 2018, they were fired to glory by Cristiano Ronaldo. Much of the side from that game is still in place, centre-backs apart, but many believe it is time for a shake-up.

Vinicius Junior has hit the ground running this season in attack and, with Kroos out injured, Camavinga has the chance to convince Ancelotti that he should be a key part of the revolution too.

Whether that is over the next few years or quicker still, only time will tell, but Camavinga is off to a flying start.