The future of business, or just another attempt to kickstart VR? 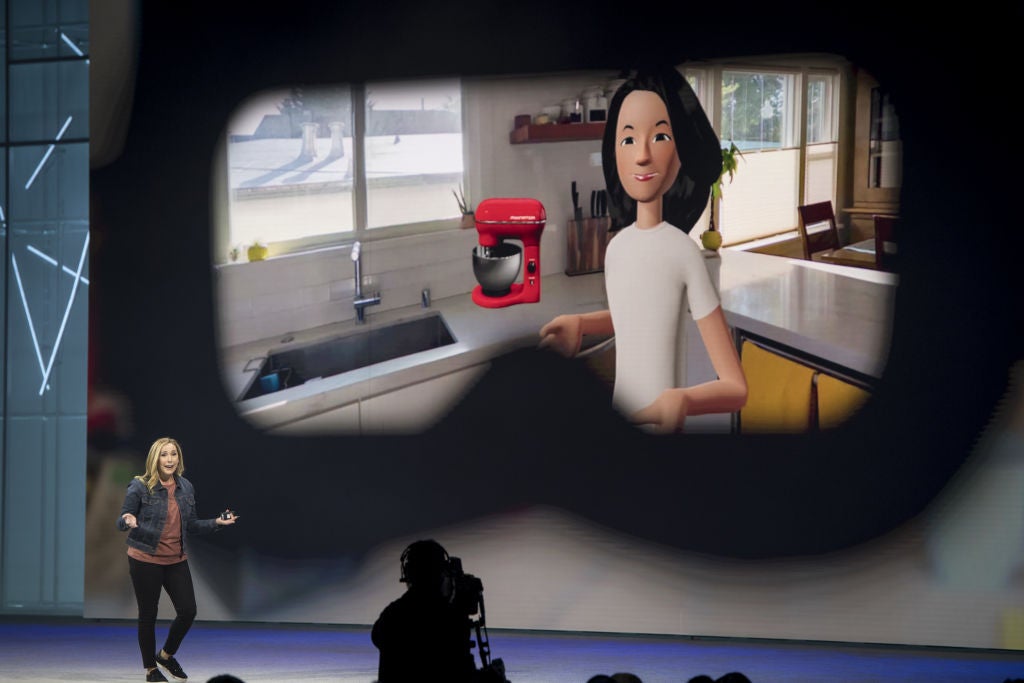 The metaverse is described by GlobalData social media research as a “virtual world where users share experiences and interact in real-time within simulated scenarios”. And for those who see a business future for the metaverse, 2020 was a breakout year: the year in which the metaverse began to gain traction beyond the entertainment sector and started to enter the mainstream. Microsoft CEO Satya Nadella wants to build an “enterprise metaverse”, and Mark Zuckerberg has said that Facebook will become a metaverse company.

So what’s actually happening to drive the metaverse as a business phenomenon – and what can we expect next?

The epic rise of Epic

One of the factors propelling metaverse concepts to front-of-mind has definitely been the pandemic and its impact on the music industry. With lockdowns keeping venues shut around the world, there were few live musical highlights during the pandemic. But there were standouts of a virtual sort to enjoy instead last year: A performance on game platform Fortnite by rap artist Travis Scott, for one, and a full-blown music festival headlined by ’90s legends Massive Attack staged by the video game Minecraft.

Before Facebook and Microsoft, perhaps the biggest company evangelising for the metaverse was Epic Games, the game platform which owns Fortnite – a gaming industry phenomenon with over 350 million users worldwide. Epic demonstrated that events such as virtual concerts in the game could attract huge audiences seeking entertainment in new formats and also serve as a channel for brands, advertisers and celebrities to engage with their customers and fans in real-time.

Prior to the pandemic Epic had already launched a crossover with Disney’s Star Wars franchise to create an event that was both promotion and plot point for 2019 blockbuster The Rise of Skywalker. The same year saw it host its first ever in-game concert.

Having demonstrated its ability to operate in the metaverse, Epic raised $1bn in April 2021, led by a $200m investment from Sony. Meanwhile, social media-blended gaming platforms such as Roblox and game makers like Niantic are joining the Fortnite developer in developing metaverses. Game developers with similarly active metaverse offerings could quickly become acquisition targets of the aforementioned big firms, depending on the success of their products and underlying technologies.

The metaverse is all about communities, and gaming is an ideal starting point. But beyond gaming, many forward looking executives see a metaverse role for enterprise tech, something which Facebook has recently demonstrated with the launch of its Facebook Workrooms.

Why does Facebook want us to live in the metaverse?

Facebook Workrooms is the social media giant’s attempt to dominate the emerging metaverse market, in what could be seen as a bid to take on Zoom with the magic of virtual reality (VR).

Does Facebook want people to live in the Metaverse? Not quite. Though CEO Mark Zuckerberg wants Facebook to become an online metaverse, for now Workrooms offers a way for them to do business rather than live in this brave new world.

Not that Facebook’s enthusiasm for VR is entirely new. In common with other Big Tech firms it has long been trying to push VR technology into the mainstream, especially since it acquired VR-headset brand Oculus in 2014.

Previous attempts have been a damp squib. Zuckerberg faced a massive backlash in 2017 when he used the social VR platform Facebook Spaces to walk through the hurricane-damaged streets of Puerto Rico, and Microsoft for its part has largely abandoned its attempts to get consumers to buy its HoloLens headset. The HoloLens is nowadays offered more as a tool that companies and organisations might buy for use by surgeons, technicians – or soldiers.

Two years after the “tone-deaf” Facebook live streaming event, Spaces shut down to make way for the next stage in Facebook’s VR journey: Facebook Horizon, an online VR game with portals to user-generated worlds and the tools to create them with.

Facebook Workrooms is traded under the Horizon name. In a blog announcing the new platform, Facebook suggests that Workrooms is a new way for remote workers to collaborate. The service enables users to join their colleagues in a virtual room through use of VR headsets, where digital whiteboards can be found and everyone looks like the customisable and animated memoji available with Apple since iOS 12. Anyone without an Oculus headset can dial in Zoom-style as a video call or a voice on audio.

“In the coming years, I expect people will transition from seeing us primarily as a social media company to seeing us as a metaverse company,” Zuckerberg told The Verge in July. “In many ways the metaverse is the ultimate expression of social technology.”

If this all sounds out of the blue, then remember Facebook has been dabbling in social VR hangouts since 2016 with Oculus Rooms and 2017’s Facebook Spaces (both now defunct). The company has even been hosting major VR concerts on the event-focused Oculus Venues platform since 2018. This year the service was renamed to simply Venues, signalling Facebook’s bold aims in this space. But why is Facebook so interested in having a metaverse, and how does Workrooms play into its vision?

“Facebook has long advocated that augmented reality (AR) and VR can radically transform workplaces,” says GlobalData principal thematic analyst Laura Petrone. “Now the emergence of the hybrid way of work, where employees can work from whatever location they like, is providing Facebook a good chance to showcase its VR capabilities and to appeal to its consumer base with the metaverse narrative.

“It remains to be seen whether employees, already struggling with digital/Zoom fatigue, would find it appealing to interact with digital avatars in a corporate version of the metaverse.”

Is a Facebook Metaverse for business the next phase of the internet?

For almost anyone in business facing the coming era of post-pandemic working, a key question is whether the Facebook Metaverse is the next phase for the internet. Metaverses in general are picking up steam around the world; in South Korea for example a metaverse alliance was launched in May between 17 of the country’s industry leaders. The initiative from the nation’s Ministry of Science and ICT would work towards creating a shared virtual space where users can engage with each other via digital avatars.

Augmented reality has become a common fixture in social media thanks to the use of filters on social media platforms like Snapchat, TikTok and Instagram (which users can already switch in and out of from Facebook, in a super-app style hookup that may one day be seen as proto-metaverse).

Social may be a big catalyst for the metaverse, but so far Facebook stands alone on this front. In Korea, often a nation which takes the lead in matters digital, the country’s own social giant Kakao (owner of messaging app KakaoTalk and social platform KakaoStory) has so far concentrated on virtual golf and health training only when it comes to VR and AR. In China, TikTok and Douyin owner ByteDance is moving into the metaverse, but only through games; late last month the company acquired VR start-up Pico Interactive in a deal estimated by sources to be worth close to 5 billion yuan ($772m).

There may not be virtual TikTok and Twitter rooms just yet, but the connected nature of the metaverse could see users jump from a game into a social network or virtual concert, all through a headset. The ultimate vision of the metaverse would mean these platforms don’t have to be owned by the same companies for this accessibility to work.

Safety investing in the metaverse

Such flexibility could pose various security issues, however. Speaking with Verdict, GlobalData analysts note that with the metaverse still being largely conceptual, it is better to view it as an extension of existing social media platforms to see what cybersecurity issues it may present for consumers.

“While several tech enthusiasts are endorsing an open metaverse platform that would allow users to traverse metaverses, this will present different security issues,” say the GlobalData analysts. “Metaverse users and providers will be vulnerable to third-party coders and, by extension, hackers.

“If users are to be able to use services provided by different companies on a single, open metaverse, then the providers would need to share common, or interlinked, security systems.

“Whether security is built-in, of course preferable, or bolted on as is too often the reality, will be down to individual companies. The responsibility will be on the vendors.”

GlobalData’s analysis also notes that an interlinked system could lead to privacy concerns among users, given their data could be shared by all the metaverse providers.

“To protect all aspects of data privacy, the virtual platform must implement privacy by design, something that is already required of technologies crucial to the metaverse such as AR and VR,” says Charlotte Newton, thematic research analyst at GlobalData. “You cannot retroactively apply these privacy systems – they must be built in from scratch. Plus, the scale of the metaverse, accommodating millions of users, will make it even more difficult to control.”

“The metaverse will be a space where some of our social and work interactions will happen in a virtual format, as such it will face several regulatory challenges, mainly on data privacy and security,” agrees Petrone, noting that Facebook’s reputation on data privacy is already damaged.

These kinks will need to be ironed out soon. Enterprise is fast becoming a key frontier for the metaverse; businesses are critical markets for platforms such as AR and VR and will influence metaverse development.

BMW is already building a digital twin  – a digital representation of a physical asset, system, or process  –  for its factory using Nvidia’s metaverse platform Omniverse. Microsoft says that it will build its “enterprise metaverse” with Mesh, a mixed-reality, cloud-based meeting app that can teleport a person digitally to a remote location for shared experiences. This enterprise-grade metaverse is ideal for work revolving around 3D physical models.

While the metaverse may start slow as the technology remains in a nascent stage, market competition will intensify as the tech titans battle for market dominance and non-tech brands track their progress for potential revenue and operational improvements.

Ultimately, beyond business adoption, metaverse consumer platforms will transform how people play, shop, access media, and interact. All this means that cybersecurity and data privacy will be critical for metaverse developers.

“We may well see several cybersecurity start-ups appear, specialist vendors for threat monitoring and protection of private data such as biometrics,” GlobalData analysts tells Verdict. “These start-ups may get ahead of the game compared to traditional cybersecurity vendors.”

After all, while the metaverse will offer brave new worlds as it grows, it’s best to remember those realities will be accompanied by the same old risks.

IT Management and Optimisation Systems for Railways

IT Management and Optimisation Systems for Railways

Opinion | Face It, Facebook Won’t Change Unless Advertisers Demand It

Facebook Connect: How to watch the big AR, VR event